Sadly we have said goodbye to Amber. This lady was so lovely to have as part of our family and we dreaded the day would come when she was no longer with us. That day came in January.

During 2007 Kieran became the regular handler for Amber and he showed her at several shows. At her final show for 2007 she was awarded her 20th CC to achieve her Bronze Merit Award from NZKC. Since then he has gained the necessary CC's for her to be awarded the Silver Merit Award and her Gold Merit Award. Kieran loves showing Amber.

Amber had her first litter for us on 31st October 2005. Her last litter born May 1st 2010 to Ch Glenrere Dark Invader (Zorro) have been wonderful. Her sable daughter Leah (Ch Collievale Golden Invasion of Glenrere) has gone to Dilys Stephens and is being shown here in NZ and has been awarded her Champion title. Her Tri sister Maya (Aus Ch Collievale Dark Ambitions (Exp Aus) is living in Australia and has gained her Australian Champion title. Maya is currently being trained to compete in obedience and has undertaken a herding instinct trial with great results. Another of the litter originally went to live on a farm but has since gone to live with Denise Grace (Jaymlyn Collies) and has also gained his title. Bruce (Ch Collievale Back to the Farm). 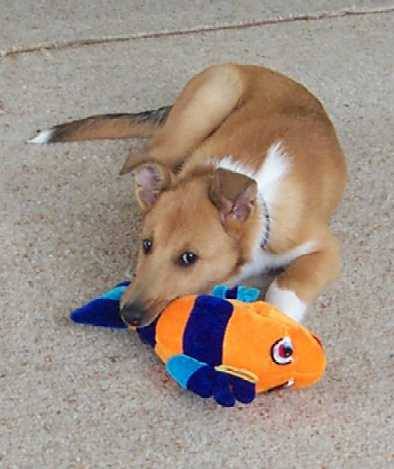